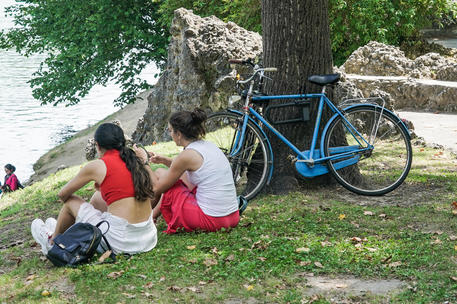 (by Alessandra Briganti) (ANSA) - BRUSSELS, JUL 8 - The 'Green Ring' project carried out by the metropolitan city of Turin is "a positive intervention that contributes to reducing urban land consumption and raising the quality of the rural-urban environment", according to a study on urbanization and the sustainable use of land conducted by the ESPON programme, which is specialized in the evaluation of regional policies in the EU.
Among other things, this document underlines how, in the past 18 years, only 11% of the land 'consumed' in Europe by the expansion of cities has been used for green areas.
Turin's 'Green Ring', which 93 municipalities are involved in, is conceived as green infrastructure designed to offer ecological, social and economic benefits to the community, by connecting them to natural, river, agricultural areas, historical cultural heritage, and the residences of the Royal House of Savoy situated in the localities of the metropolitan belt.
The aim of the project, launched in 2009 with 10 million euros in financing from the ERDF European fund, is to promote a new and alternative vision of the territory, based on quality of life and environment, that will strengthen the attractiveness and competitiveness of Turin's metropolitan area.
"It is a strategy that combines intersectoral policies aimed at improving rural-heritage conservation and green areas in the urban-rural interface, with the mitigation and renaturation of infrastructural barriers," write the researchers. The 'green belt', of which there are many examples in Europe - Leipzig, Cork, London, just to name a few - is a 'containment strategy'.
These initiatives aim to reduce urban development beyond a certain area, therefore limiting the expansion of urban areas, so called 'urban sprawl'.
They also aim to promote a more rational use of land.
As a result, this type of intervention encourages urban regeneration and densification.
According to the researchers, the success of the strategy in Turin's case is demonstrated by its "capacity to mobilize substantial funds for the implementation of short-term projects that are, at the same time, part of a long-term plan". The study gives other positive examples of 'containment strategies'.
For instance Stockholm's is judged interesting because it engages "private actors in the public sphere, facilitating and promoting stakeholders' activism in public policies".
According to the ESPON study, between 2000 and 2018, in the EEA (European Economic Area), which includes the EU, the United Kingdom, Switzerland, Norway, Island and Liechtenstein, 1.17 million hectares of land were converted to urban use - the equivalent of about 248 football fields a day.
Some 35% of the 'consumed' land became part of the urban fabric, mainly residential areas, 37% was allocated to industrial use (including shopping centres and offices), 17% was used to build infrastructure, including airports, and only a small part, 11%, was transformed into green urban areas. (ANSA).