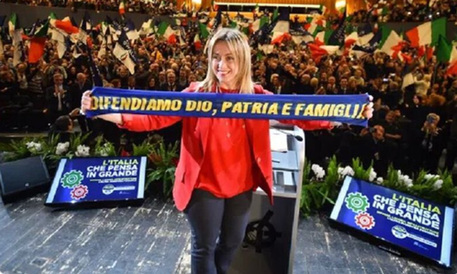 (ANSA) - ROME, SEP 27 - The rightwing Brothers of Italy (FdI), which won Sunday's general election, saw their votes rise almost five-fold over what they got in the last election in 2018, according to interior ministry figures released Tuesday.
Votes for FdI, which surged from 4% four years ago to 26% this time out, rose from 1,429,550 to 7,300,628, the Viminale said.
This was a rise of almost 5.9 million voters.
The other two members of the winning coalition, the rightwing League and the centre-right Forza Italia, lost a total of 5.5 million voters with the League down 3-2 million and FI down 2.3 million.
On the other side of the spectrum the centre-left Democratic Party (PD) lost around 800,000 voters while the populist 5-Star Movement (M5S) lost over six million.
The PD garnered a disappointing 19%, a tad more than it did in 2018, while the M5S saw its share of the vote fall from a third to 15% after a string of defections - although it performed much better than pre-election polls had indicated. (ANSA).