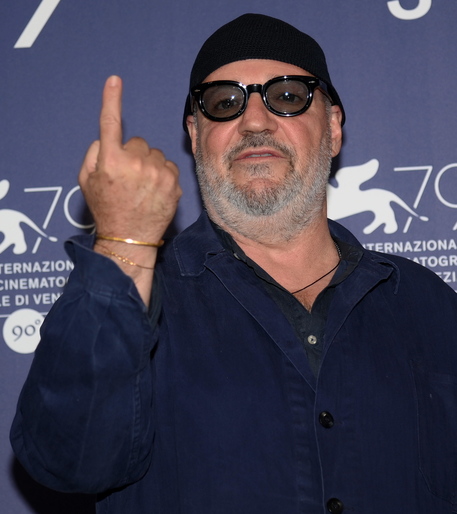 (ANSA) - ROME, SEP 5 - Italian director and documentary-maker Gianfranco Rosi on Monday presented his new travelogue on Pope Francis at the Venice Film Festival saying the Argentine pontiff was a "rock pope" whose fans could vie with those of British popstar Harry Styles, also on the Lido for his Don't Worry Darling.
Raising his voice to be heard above the screams of Styles' fans, Rosi said "don't think it's any different from when Pope Francis travels, the screams and shouts are the same: he's a real rock pope".
The documentary, out of competition in Venice and in Italian cinemas on October 4, the feast day of St Francis, from whom the pope took his name, In Viaggio (On The Road) is a work that the 58-year-old Eritrean born director has been updating to the last minute.
Rosi, who won the Golden Lion in Venice in 2013 with Sacro GRA and the Golden Lion at Berlin in 2016 for Fuoccoammare, had produced a documentary spanning all nine years of Francis's pontificate through 37 trips from Brazil to Cuba, from the USA to Africa, and on to southeast Asia.
The documentary is spliced with archive footage, images from Rosi's own cinema, and current events and more recent stories.
And, of course, the pope's speeches on the poor, Nature, migration, human dignity, war, and paedophilia in the Church.
"I had total freedom," he said, "and also six months to decide whether to do it or not. I selected about 200 hours of material (from the original 800) and I found myself having to mount it for a whole year to get to a synthesis of 80 minutes. And all this fo a film that remains in any case 'open." Rosi, who chose to end the docu with a shot of a plane revving its engines for take-off, stressed: "The war in Ukraine changed things. If the pope leaves for Kyiv I'm going to be there. This film is not over".
Calling Francis a "solitary and brave pope," Rosi said "among the most beautiful memories are those of his trip to Canada in which the pontiff publicly apologized for what the missionaries did to the Natives. He spoke of a 'cultural Holocaust' saying 'the pope says sorry in the name of the Church and also personally'. But from what I've understood there are many who have never forgiven him (for his liberal stances)".
Asked what had prompted hi to make the doc, Rosi said "it was a life experience, but also an act of humility" and said "he is a pope who speaks to believers and non-believers alike, and I'll never forget his gaze in the Philippines after the tragedy of the typhoon when he was meeting the poor." Asked about what he might have in common with Francis, Rosi said "Everything that Bergoglio says, for me who am a secular person, is a world that belongs to me in any case, because they are universal speeches that many politicians should adopt." He added: "Netflix will never see my works because they don't respect their algorithm. On that platform you don't even see any more the name of the director and now many young cineastes are agreeing with this formula." Asked if Francis was a "pope alone", Rosi replied: "Yes, you realize that immediately, and he's also full of courage: I've seen him go around in his car without any protection without showing any fear". (ANSA).